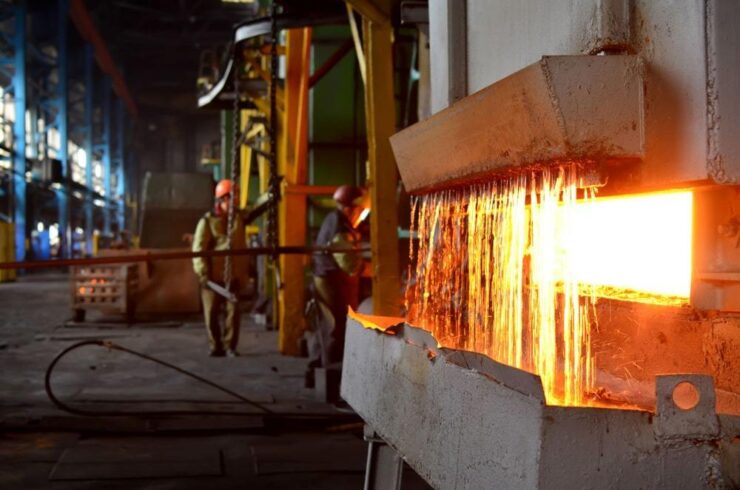 The process of holding metals at room temperature or at a predetermined temperature for the purpose of increasing their hardness and strength by precipitation.

The hardening process consists of heating the components above the critical (normalizing) temperature, holding at this temperature for one hour per inch of thickness cooling at a rate fast enough to allow the material to transform to a much harder, stronger structure, and then tempering.

A heat treatment process used to soften the metal and produce desired changes in its microstructure. Annealing is used to improve machine-ability, dimensional stability, relieve stresses and define the crystalline grain structure of the material.

Austempering is the process of heat treatment where the steel is heated to austenitizing temperature, held there for sufficient period of time to produce homogeneous austenite.

A solid solution of iron and carbon (and sometimes other elements), obtained by heating the material to a temperature above the upper critical temperature (or transformation temperature).

The process of forming austenite by heating an iron/carbon alloy above its transformation temperature.

A process of annealing usually carried out in a controlled furnace atmosphere so that surface oxidation is reduced to a minimum and the surface remains relatively bright.

Adding carbon to the surface layer of steel by heating the steel below its melting point, while in contact with carbonaceous solids, liquids or gases.

It is the margin distance from the carburized workpiece surface at which the carbon content reaches the specified limit, typically C = 0.35 %. Commonly, the carburization depth  is around 1 mm, with deep carburization it is up to 2 mm.

Case-hardening or surface hardening is the process of hardening the surface of a metal object while allowing the metal deeper underneath to remain soft, thus forming a thin layer of harder metal at the surface.

Cooling rates are usually expressed in terms of the time taken for product to become ‘3⁄4 cooled’ or ‘7⁄8 cooled’. This is calculated as the time for 3⁄4 or 7⁄8 of the initial difference in temperature between the product and the cooling medium to be removed.

Cyaniding is a case-hardening process that is fast and efficient; it is mainly used on low-carbon steels. The part is heated to 871–954 °C (1600–1750 °F) in a bath of sodium cyanide and then is quenched and rinsed, in water or oil, to remove any residual cyanide.

Decarburization is a loss of carbon in the surface-adjacent zone of the material (Gunnarson, 1963). Contributing factors are high temperatures and large amounts of oxygen in the atmosphere. At higher temperatures, the diffusion rate of carbon is so large that longer annealing times lead to decarburization.

Shape Distortion (warpage) as a result of heat treatment is a result of processing or design issues rather than the expected phase changes of the material. Rapid heating can cause stresses to develop in parts because of excessive temperature gradients.

A magnetic form of iron. A solid solution in which alpha iron is the solvent, characterized by a body-centered cubic crystal structure. Fixturing: The placing of parts to be heat treated in a constraining or semi-constraining apparatus to avoid heat-related distortions.

Flame hardening is a heat treatment process where oxyfuel gas flames are directly impinged onto the gear-tooth surface area to be hardened which is then subjected to quenching. It results in a hard surface layer of martensite over a softer interior core. Its cost is considerably less than induction hardening.

Full annealing is the process by which the distorted cold-worked lattice structure is changed back to one that is strain-free through the application of heat. This is a solid-state process and is usually followed by slow-cooling in the furnace. Recovery is the first stage of annealing.

Hardenability describes how deep a metal can be hardened upon quenching from high temperature, and can also be referred to as the depth of hardening.

The temperature that metal is heated to the point of hardening.

In a hardened work piece, the depth to which a certain hardness is present.

The time until the surface of a work piece being heated attains the desired temperature.

Heating and cooling a solid metal in such a way as to obtain certain condition or properties. Heating for the sole purpose of hor working is excluded from the meaning of this definition.

Time during which a work piece is held at a certain temperature afrer the core has reched this temperature (does not comprise heating time).

Heating a metal to high temperature in order to ensure uniform distribution of components. This process is typically used to reduce chemical segregation and coring in cast structures and to produce a more homogeneous microstructure in hot worked materials.

Hardening the surface of a work piece subsequent to heating the case by short-time immersion in high-temperature metal of salt baths.

Time between immersion of a work piece and withdrawal from the bath.

A surface hardening process in which only the surface layer of a suitable ferrous work piece is heated by electromagnetic induction to above the upper critical temperature and immediately quenched.

Martempering is also known as stepped quenching or interrupted quenching. In this process, steel is heated above the upper critical point (above the transformation range) and then quenched in a salt, oil, or lead bath kept at a temperature of 150-300 °C.

Annealing white cast iron in such a way that some or all of the combined carbon is transformed to graphite or, in some instances, part of the carbon is removed completely.

Martempering is also known as stepped quenching or interrupted quenching. In this process, steel is heated above the upper critical point (above the transformation range) and then quenched in a salt, oil, or lead bath kept at a temperature of 150-300 °C.

A constituent formed in steels by rapid quenching, consisting of a supersaturated solid solution of carbon in iron. It is formed by the breakdown of austenite when the rate of cooling is large enough to prevent pearlite forming.

Nitriding is a heat treating process that diffuses nitrogen into the surface of a metal to create a case-hardened surface. These processes are most commonly used on low-alloy steels. They are also used on titanium, aluminium and molybdenum.

Heating a metal to such a high temperature that its properties are impaired. When the original properties cannot be restored by further heat treating, the overheating is known as burning.

A patent is an exclusive right granted for an invention, which is a product or a process that provides, in general, a new way of doing something, or offers a new technical solution to a problem. To get a patent, technical information about the invention must be disclosed to the public in a patent application.

Pearlite is a two-phased, lamellar (or layered) structure composed of alternating layers of ferrite (87.5 wt%) and cementite (12.5 wt%) that occurs in some steels and cast irons.

To heat something to a particular temperature before putting it to be heated inside.

Process annealing is carried out intermittently during the working of a piece of metal to restore ductility lost through repeated hammering or other working. Full annealing is done to give workability to such parts as forged blanks destined for use in the machine-tool industry.

In materials science, quenching is the rapid cooling of a workpiece in water, oil, polymer, air, or other fluids to obtain certain material properties.

The process of quenching is a progression, beginning with heating the sample. Most materials are heated to between 815 and 900 °C (1,500 to 1,650 °F), with careful attention paid to keeping temperatures throughout the workpiece uniform.

Quench time is a measure of how long a steel casting spends at high temperature during quenching. While castings cool, the quench water warms; therefore, there is a one-to-one relationship between the two.

Shock hardening is a process used to strengthen metals and alloys, wherein a shock wave produces atomic-scale defects in the material’s crystalline structure.

The purpose of the soaking stage is to keep the metal at the appropriate temperature until the desired internal structure takes shape.

Solution treatment is a heat treating process that heats alloys to a specific temperature, sustaining that temperature long enough to cause one or more constituents to enter into a solid solution and then rapidly cooled to maintain the solution’s properties.

Spheroidize Annealing is a type of annealing process involving controlled heating and cooling to produce a microstructure consisting of spherical (spheroidal) carbides in a ferrite matrix.

Thermal Stabilization involves heating the alloy to higher temperatures and maintaining the desired temperature for a set amount of time.

Stress Relieving is the treatment of a metal or alloy by heating to a predetermined temperature below its lower transformation temperature followed by cooling in air.

Sub-critical annealing consists of heating the steel to below the lower critical temperature. This type of annealing is mainly carried out in the temperature range 630° – 700°C to reduce hardness by allowing recrystallisation of the microstructure to occur.

Sub-zero treatments are treatments in which components are cooled below room temperature. There can be many reasons to do this, but the main ones are to remove retained austenite from quenched components or tools, to increase the wear resistance of tools or to stabilise the component.

Temper embrittlement refers to the decrease in notch toughness of alloy steels when heated in, or cooled slowly through, a temperature range of 400°C to 600°C.

Process of improving the characteristics of a metal, especially steel, by heating it to a high temperature, though below the melting point, then cooling it, usually in air.

Through hardening, also known as neutral hardening, is the process of strengthening a steel alloy using a rapid quench for increased hardness throughout the material.

A temperature range in which an internal change takes place within a metal. Also termed transformation range.